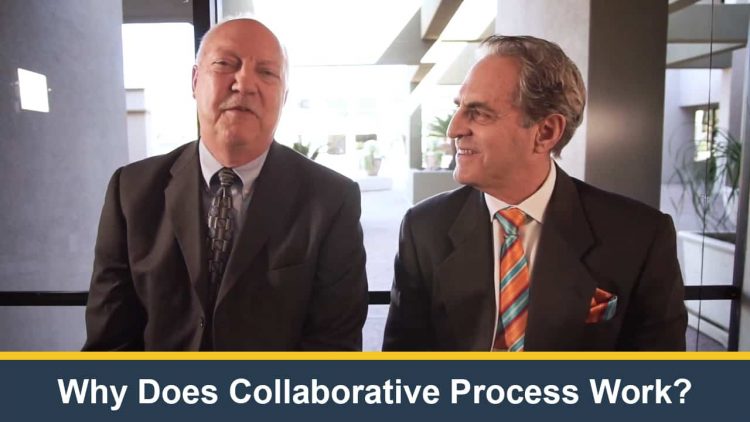 DANIEL GAUGHAN: Hello, I’m DJ Gaughan. I’m a psychologist and my practice is in Central Phoenix and I serve clients from all over the Phoenix-metro area. And this is —

STEVEN KEIST: I’m a lawyer. I’m a senior partner of a five-lawyer firm. We have offices in Phoenix and – actually, Glendale and Peoria, Arizona.

DANIEL GAUGHAN: And as you can probably tell, Steven and I have both been around for a little while and we are very experienced collaborative-law professionals. We’ve had quite a few cases; a few together and a few with other collaborative professionals as well. And we’re here to talk about the collaborative process and why it works and why we both think it’s a great way to handle a divorce situation.

STEVEN KEIST: Yeah, DJ. I’m often asked by clients, “Well, why collaborative law? Why is this better than litigation or mediation,” which are the two other major forms of resolving marital conflict. And there are a number of reasons. One of those is that the process is cooperative, so all of the professionals and the parents, the couple, work together rather than being in conflict throughout the process, which we’ve both experienced a lot of. And it’s private. It’s done outside of the court system. The agreements are reached in private meetings that don’t involve the court and public hearings.

DANIEL GAUGHAN: Yes, that’s very important for a lot of people. And I think a key is that it reduces the conflict between the parties, helps parents communicate better with each other, it makes sure that everybody’s voice is heard – mother, father, and the children.

And you say, “Well, why is a psychologist involved in this?” Well, a key part of a divorce is the emotional piece. It’s a very difficult time for everybody involved – for both parents and for the children. And the idea of the collaborative professional who’s a mental-health provider is that we are able to help the parents communicate with each other. If you were communicating really well with each other, you probably would not be in the situation of having a divorce to begin with, and then things really blow apart when the divorce actually comes about.

And so it’s more important at this time than any juncture perhaps to be able to communicate effectively with each other. And so that’s what my job is.

STEVEN KEIST: Well, and that cooperation is very important. One of the other questions I’m often asked is, “How long is this going to take? What’s it going to cost?” That a thing everybody is concerned with when we first meet with them. And I can confidently say that the collaborative process is fairly efficient and the total time involved is usually substantially less than litigation. Additionally, because of that, because of the cooperative nature and the fact that it’s done efficiently, the cost for all of the professionals that are involved when you look at both sides of the equation can be, and often is, substantially less than a case that’s litigated in court.

STEVEN KEIST: That’s right, yeah. I’m not a psychologist and I’m not an accountant, and paying me to do that work is not an efficient of resources. So it’s great to have a team to work with where everybody can us their expertise, and that keeps the cost and the acrimony at a minimum.

DANIEL GAUGHAN: yes. And the final piece of this is that the attorneys – Steve, you can speak to this – they are not working directly in opposition to each other. The goal is a peaceful resolution. When I do my work, I say, “My job is to help people bridge the gap to reach an agreement they can live with moving forward into the future.” And I think that’s what the attorneys then do. They work with each other to help the parents find their own solution, not ones that we would come up with, but for the parents to find their own very best solution to the situation that they’re in.

STEVEN KEIST: Right. So instead of paying lawyers to essentially fight with each other, you’re paying us to help you come to a cooperative agreement that is much more useful for you in the future.